Hey loves, I’ve recently switched my Mask Monday Chit Chats to monthly instead of weekly. I’ll still be posting at least once a week but for now I want to focus on other content. Below is 6 ways to avoid toxic people:

Surrounding yourself around toxic people or situations will interrupt you from living your best, happiest and most successful life.

Unfortunately toxic people are everywhere and realistically some people are very good at covering up their toxic behaviors. Usually if you have to question if someones toxic, they usually are.

Sometimes it’s easy to just cut it off but sometimes it’s a bit more complex than that. Considering that it can involve people you care about.

Toxic people create toxic situations which create a toxic energy for those around them. Here are some ways to avoid toxic people:

Setting boundaries are so important. Set a solid line on what you will or will not tolerate from people. Make sure to identify them clearly and communicate them clearly. This will help you sense when things aren’t right.

Boundaries are a way to take care of yourself. It helps limit going through frustration, anger or resentment because you have boundaries and have a better chance of preventing things from getting toxic.

Even though people will slip through the cracks, having boundaries will make it easier for you to catch. Always make sure your cautious of people trying to manipulate you to work around your boundaries. People usually use the guilt trips to work around them when they realize they can’t get what they want.

Toxic people hate boundaries. They want to be able to do as they please without anyone getting in the way. Most people will get frustrated if they can’t break or get around your boundaries and end up going their own way.

Just remember someone who doesn’t respect your boundaries, should be an automatic red flag.

The first thing to acknowledge is that you can’t force anyone to change. Trying to change someone will just cause you disappointment and frustration. It honestly will be a hopeless journey.

Most toxic people won’t change because they don’t even realize they’re toxic, even if people tell them. They prefer people to accommodate them and their needs which is more satisfying than changing.

It’s tricky because toxic people might make a tiny adjustment to make it seem like they’ve changed and give you that hope. Most will only hold the act for a little and go right back to their toxic ways.

The best way to deal with it is by keep your distance or cutting them off completely.

This ones a biggie. A toxic person will be an extremist on either or of two sides I’ll explain below…

Someone who over-apologizes but continues the same action. A toxic person will throw an apology around with no real meaning behind it. Most of the time that person apologizes to “clear” their conscience rather than acknowledging your pain. So at the end of the day that empty apology is still about them, not you.

The other toxic extreme is someone who doesn’t apologize at all because they think they’re always right. This type of toxic person will do anything in their will power to justify their actions. They will lie, twist the story or make you feel guilty before they admit to being wrong. This creates an endless and pointless argument if you don’t put a stop to it.

Arguing with someone like this is not worth your time or explanation because there will never be a logical resolution.

Someone over apologizing with no change or someone who can’t apologize at all are all big red flags to look for. Either end of the spectrum is toxic.

This is a toxic person who feeds off toxic situations and other toxic people. Pretty much, a recipe for disaster any time you come in contact with them.

We all know that someone who is always involved in their own drama or people’s drama. These people crave and love being involved in messy situations.

This one can definitely speak for itself. It’s a toxic cycle of involving their self in drama, getting caught up in the drama and them trying to victimize their self out of the messy situation. These people are usually very two faced individuals.

Either way, this is one of the most toxic and draining people to deal with. It’s important to cut off people like this from around your circle to save yourself the headache.

5. Let Them Keep The Spotlight

This is a person who is all about me, me and me. The world revolves around them always. This creates many issues.

These type of people view the world as the problem. They have 101 excuses or justifications before seeing their self as a problem. If you question them, they become defensive. They can’t take any criticism. Any criticism you give, they will somehow twist and turn the situation so it falls back on you.

They have an illusion that they are “perfect” and never make mistakes. They won’t ever admit when they make a mistake, instead they will go to extremes to make sure they are right.

These types of people don’t listen to anyone but want everyone to listen to them. You will notice, they always want to be the ones talking or center of attention. If the spotlight is directed somewhere else, they will quickly do anything to regain it.

This toxic trait has them live in an unrealistic world. This block their progression, self-improvement and being able to self-evolve as a person. At the end of the day, these type of people will always be about their self. You can easily be sucked up in their world and end up stuck. Set yourself free from these types of people.

Insecure individuals are super draining. This might be the hardest one to cut off because honestly you usually feel bad for the person.

Any insecurities can only be fixed by that person. That is an internal battle. This might sound blunt but it’s not your responsibility to “fix” or build their confidence.

An insecure person always sees the bad in everything. They’re always questioning the sincerity of everything. This causes them to make you feel like you have to prove yourself, your friendship or your love to them consistently.

There’s a difference between venting to a friend and using your problems to make someone else feel bad for you. These types of people will talk your ear off about every possible problem they’ve encountered, are encountering or could possibly encounter.

You’ll constantly hear them complaining about everything and everyone which is usually because it’s something they’re lacking in their life. They need attention at all times or they question your loyalty which becomes draining and an unrealistic demand. Not to mention their unrealistic jealously issues, whether it’s in a relationship or friendship.

Insecure people require a lot of attention and it’s a constant battle of proving yourself. You can usually easily spot insecure people and it’s best to keep far – for your own sanity.

Sometimes the toxic person is someone closest to you – a family member, work colleague, significant other or someone you consider a friend – which makes it hard to spot or label as toxic.

Though realistically there are warning signs, you tend to miss them or make excuses for them. When you ignore the red flags you usually regret it when it’s to late and it blows up in your face.

Surrounding yourself with toxic people or toxic situations will be mentally and physically draining.

“A toxic person’s battle isn’t against you, it’s a battle against their self” -Michelle

Keeping yourself away from toxic individuals is a form of self- care, which is important and necessary.

If there’s a basket of fruits and one fruit has mold on it, it will easily & quickly contaminate the other fruit around it regardless if the fruit around it is perfectly ripe.

Think of yourself as the ripe fruit, if you keep toxic people around you, they will easily & quickly contaminate you too.

What are ways you deal with toxic individuals?

This site uses Akismet to reduce spam. Learn how your comment data is processed. 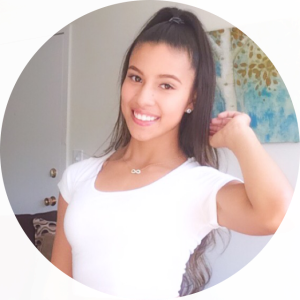 Welcome to Sincerely Michelle, a personal style & lifestyle blog inspired on self-love & living life to the fullest with a raw & honest touch. Stay in tune the first Monday of every month for Mask Monday’s Chit Chats.